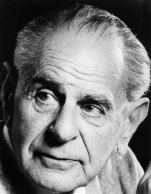 Sir Karl PopperAutumn 1992 - Professor Höschl invites Sir Karl Popper to Prague. Sir Karl postpones the visit till Spring 1993 explaining that at the original date he is engaged in Kyoto where he should be awarded a prestigious prize.


Winter 1993-94 - Professor Ernest Gellner, Central European University, Prague College, invites Sir Karl to give a seminar to staff and students at the Prague College. Sir Karl was delighted to accept. After coordinating his intentions with the Organizational Division of Charles University Rectorate, Professor Höschl renewed the invitation which Sir Karl was delighted to be in a position to accept.


26. 4. 1994 - Professor Höschl invites American financier, George Soros, together with Sir Karl, for a private dinner given by the Third Faculty of Medicine, and for a ceremony in Carolinum.

Cars of the Prague Psychiatric Centre provide a sightseeing tour around Prague. Participants: Sir Karl, Melitta Mew, Mr. Mew, Dr. Libiger. Sir Karl expresses the wish to visit the grave of Tycho Brahe and the house in which Johann Kepler had once lived. He then visited the Tynsky Church and Charles Bridge. The Johann Kepler dwelling was unpresentable. 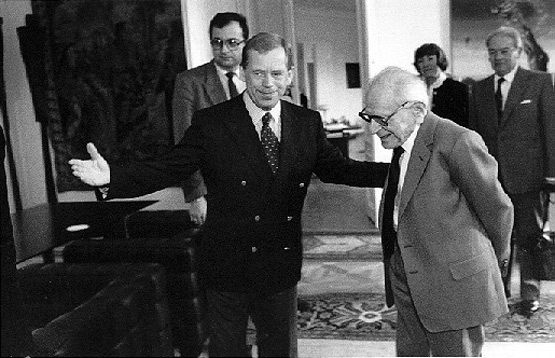 George Soros arrives at Ruzyne Airport on a private jet. 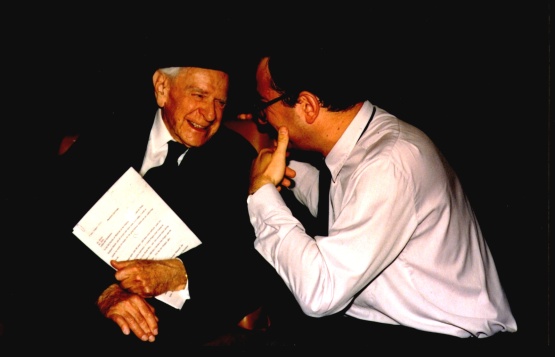 A panel discussion (seminar) held by Sir Karl Popper at the Prague College of the CEU.

The "Open Society Prize" Awarding Ceremony: The first winner of the Prize, Sir Karl Popper is decorated by George Soros who delivers a short address on the occasion.

Departure of Sir Karl on the British Airways Flight, No.857.

Extract from Melitta Mew's fax message addressed to prof. Höschl: "Our minds are still aglow with the most& wonderful memories of our trip to Prague. The reception you and your colleagues gave Sir Karl, my husband and myself was truly heart- warming and will never be forgotten."

Lidove Noviny, No.129, page 1: "American financier, George Soros, acquires archives of Radio Free Europe: George Soros has instructed his companies to start investing in Central and Eastern Europe. Federal Radio Television Administration accepted his offer that he would take over and fund the archives of Radio Free Europe. G. Soros intends to move the archives to Prague; he plans to spend U.S.$ 15 million on their maintenance and modernizing scheme."